We met Matt Tomkinson, the head chef of the Montagu Arms, and his colleague Alistair Wolseley at the Hotelympia exhibition at Excel in London back in January 2014. At that time their main interest was in a rise and fall salamander grill. During 2015 they told us they were interested in switching from gas to induction for their prospective new stove. Over several meetings during 2015 we went though various layouts for the new kitchen. Finally Matt and Alistair decided to extend the kitchen and Matt drew this design for the stove. Unusually the design was primarily Matt's, in most cases we design the stove, often the chefs ending up with something completely different to what they initially envisaged, but in this case Matt was very keen to stick with his design which we have to admit works superbly. 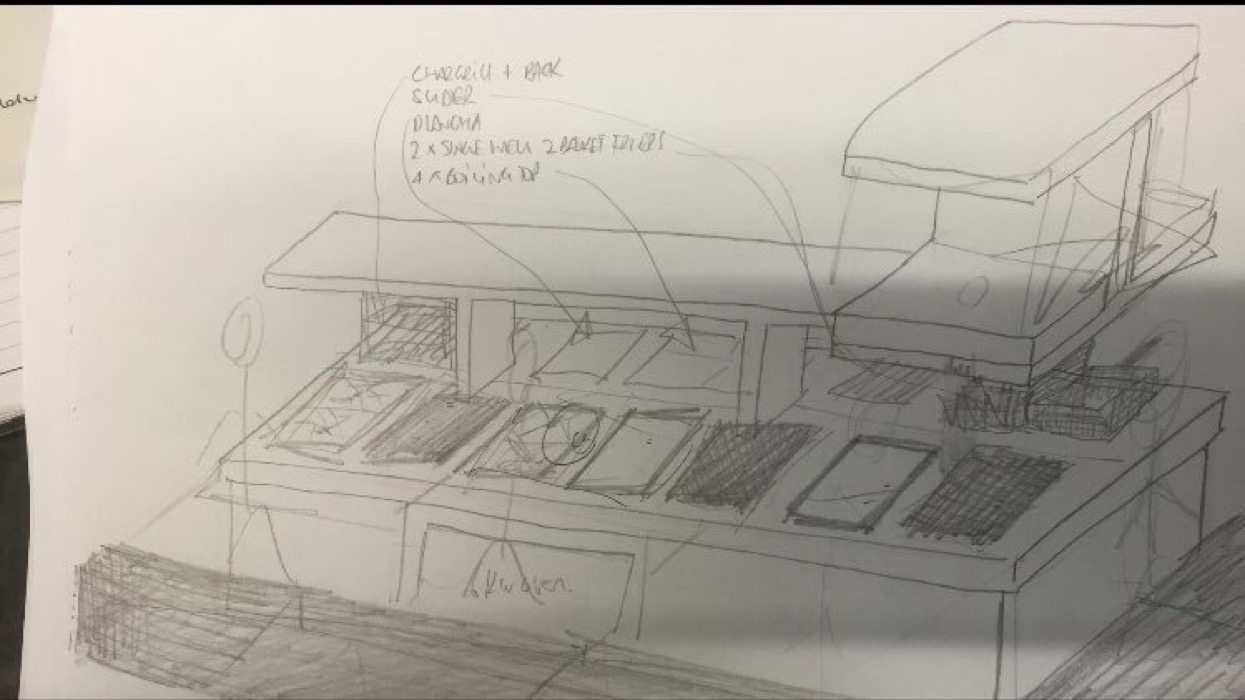 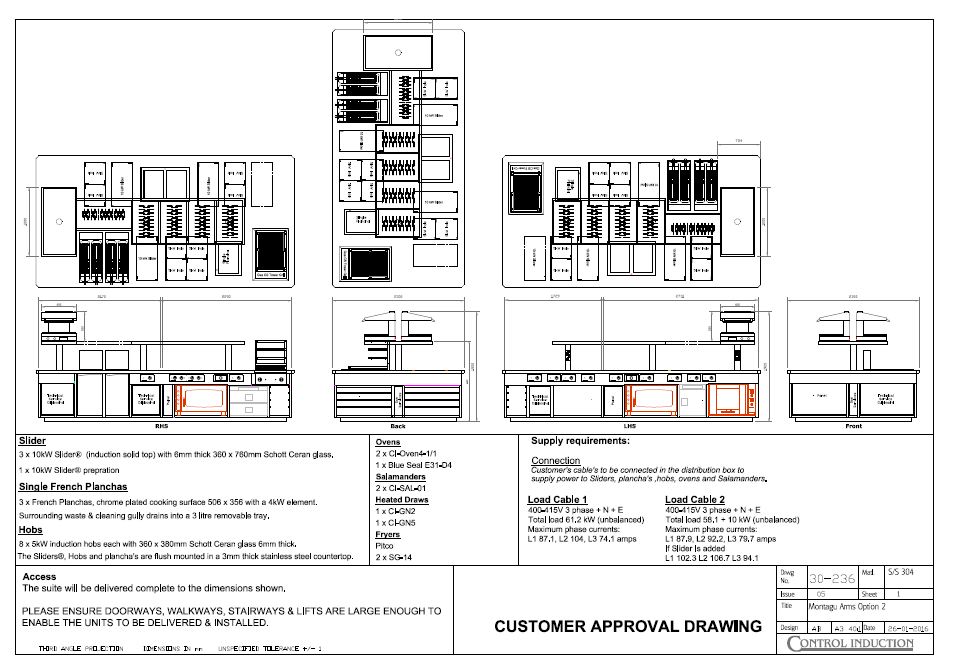 Above is Matt's sketch and our final cooking suite design drawing prior to Control Induction creating the stove, the sketch was described by chef Matt Tomkinson as his 'terrible drawing' - we thought it was quite good!

After having the new power supply installed in January 2016 the stove was ordered for delivery in March. Problems with the building of the kitchen extension meant the installation was put back until April 2016. The stove included the following:

As they came close to ordering the cooking suite the Montagu Arms team decided it would be best to build an extension to the kitchen, so in January, after ordering the induction cooking suite, work started on the kitchen extension. The original plan was to bring the cook suite into the building in several pieces, including the worktop being in pieces too. We can make the worktop in sections but prefer to deliver it in one piece. The build of the extension gave us the opportunity to at least get the worktop in, in one piece, provided we could get it built and delivered before the new kitchen walls were completed. 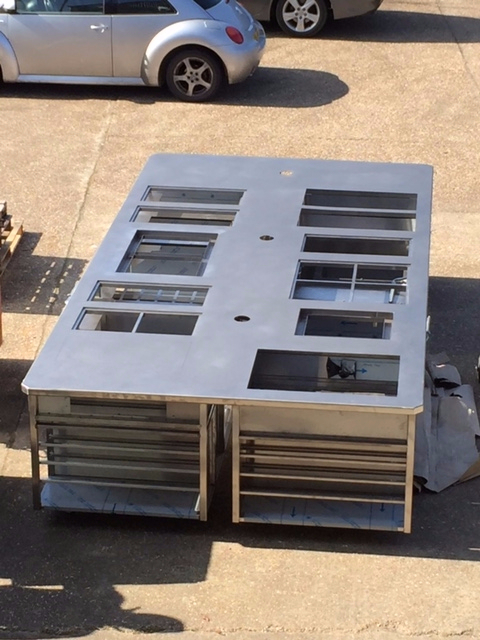 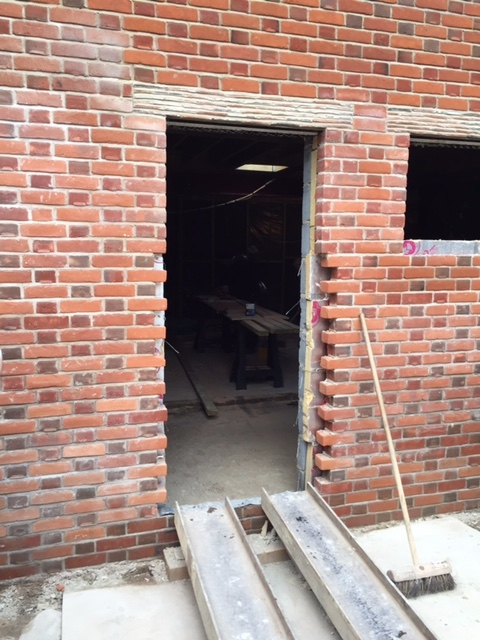 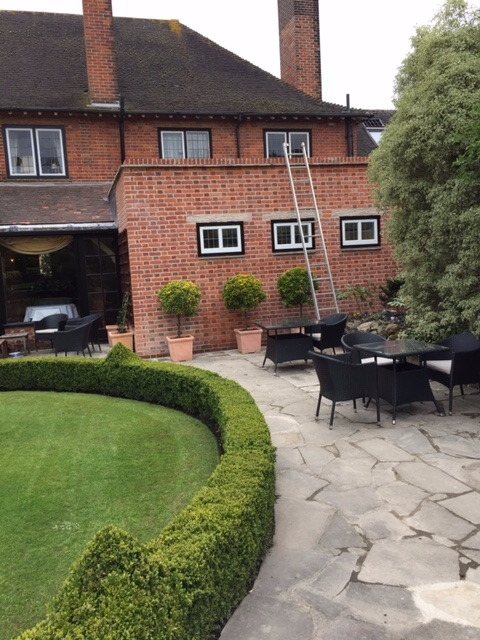 In March when the building of the kitchen extension was in progress, we did a test assembly of the cooktop at our factory. The four stove sections were joined to check it all fitted then we shipped the cooktop down to The Montagu Arms and through what we thought was a new door into the kitchen. We'd planned to bring all the parts except the cooktop through the hotel main entrance  but the unexpected new door directly into the kitchen looked very useful. We had a big surprise when we arrived with the rest of the suite in April to find there was no longer an extra door! There was now a small window and potted shrubs in a beautiful garden, luckily the cooktop was already inside the hotel. 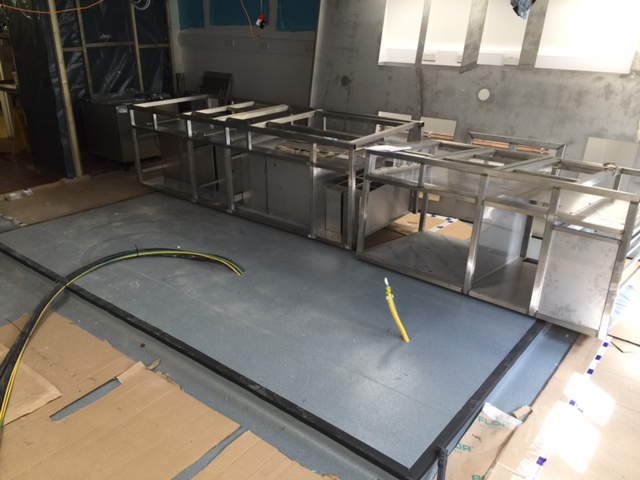 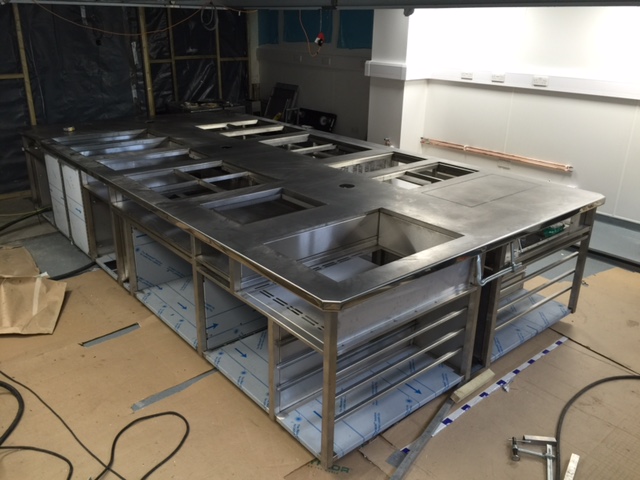 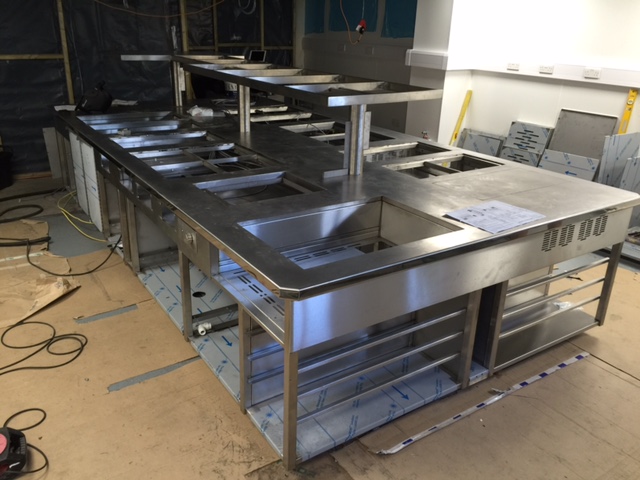 The main installation started after a couple of postponements, as soon as the new kitchen was ready for us. The four sections of stove came in through normal doorways and were assembled on the plinth before lunchtime. The cooktop and salamander stand were then fitted. Day 1 progress was rapid, the stove looking 'nearly finished' by the time we packed up on the Monday evening. The process of fitting all the electronics, filters and ventilation systems was spread over the next few days. We had the luxury of being able to work at a steady pace without working through nights, because the rest of the kitchen equipment wasn't arriving until the following week. 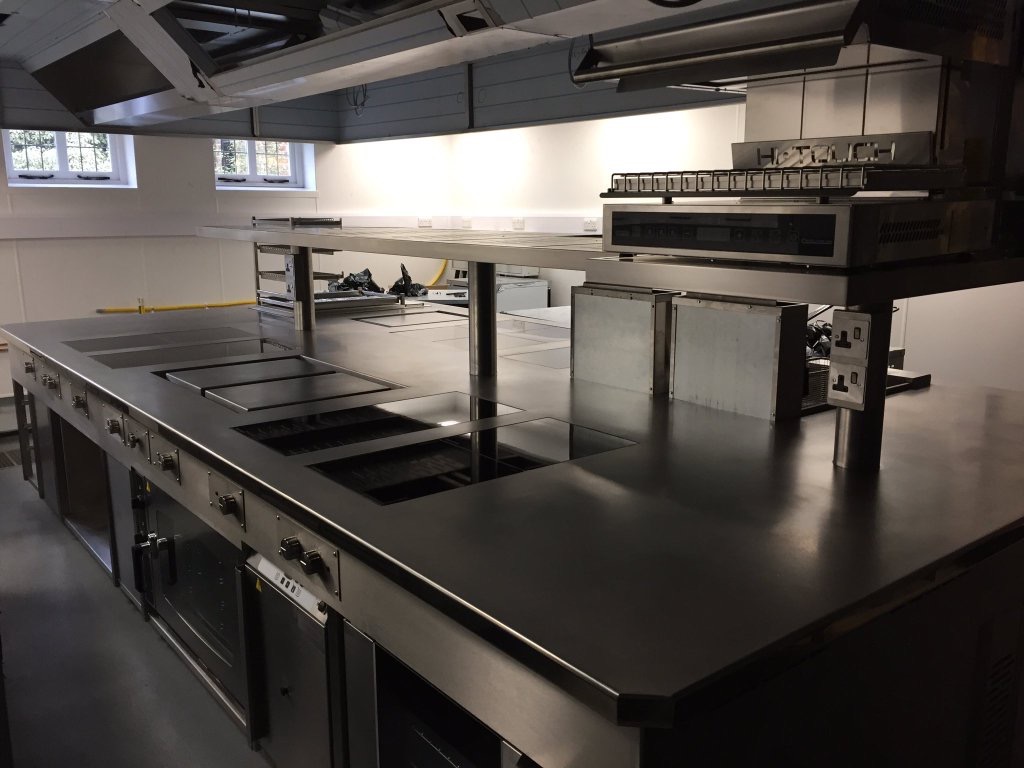 The stove was finished on the wednesday evening. 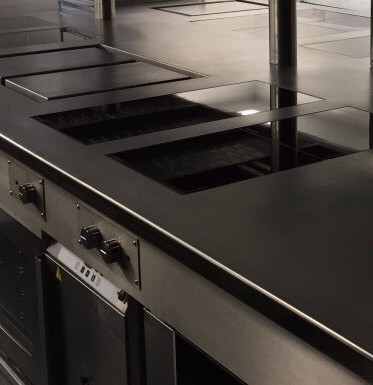 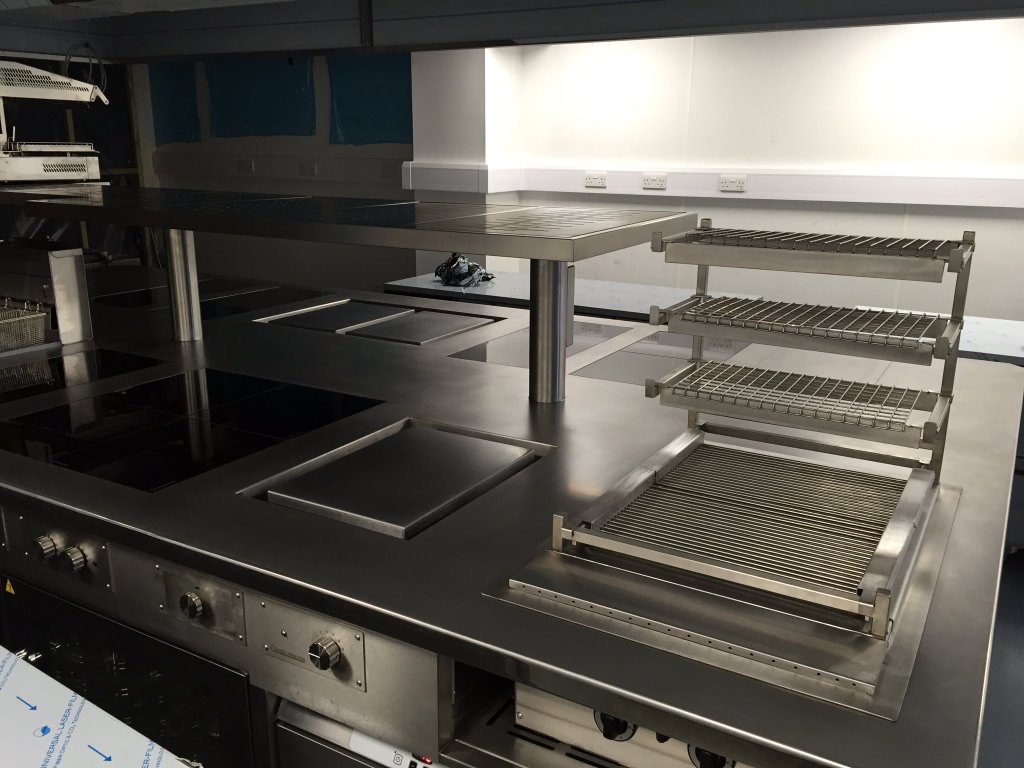 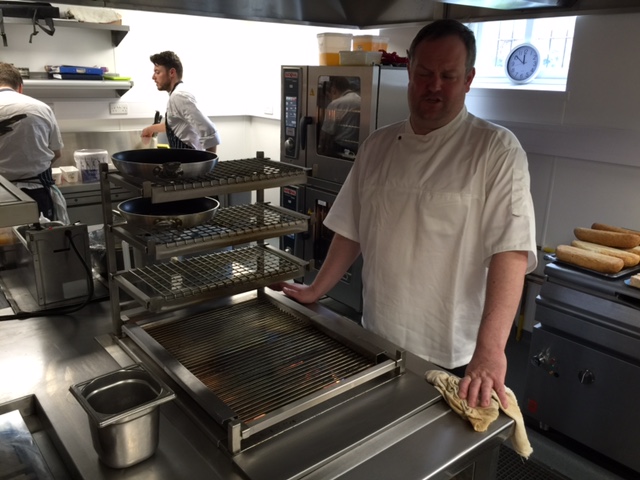 The cooking suite finished, apologies to Matt for the poorly lit photo! One last point, this whole installation was carried out with massive help from the Montagu Arms team with the hotel open the whole time and the original kitchen in operation. 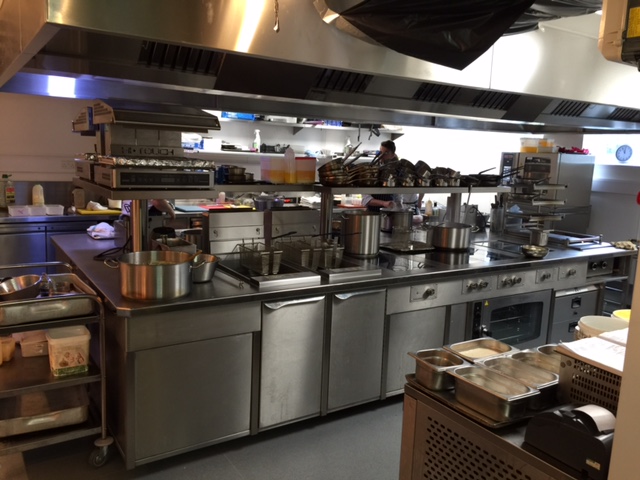 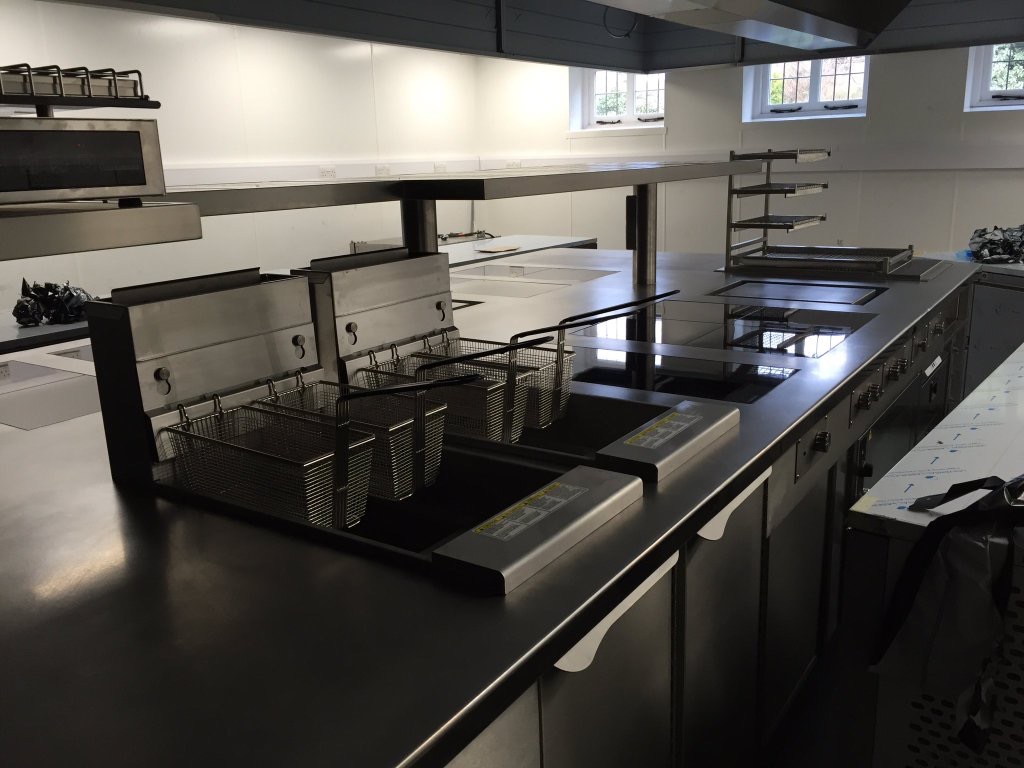